If I were to detail all of the happenings of fifty years of the life of the school we would be here all evening, so I shall confine the news to an outline of events which have marked the development and change.

This school was one of the first post war schools built by the Old Hunts, Education committee.  At the time of the build Mr Ian Currey was the Director of Education.  The school was built to cater for the newly developed housing estate.  When the school opened there were 234 houses completed and 140 under construction.  The school opened with 306 children and 9 teachers.  We hear much about community use of the school these days; it is interesting to remember that in 1953 the Civil Defence earmarked the school for Emergency Feeding. As the Estate grew the school reached 528 with fourteen classes.

The first Head Teacher, Mr. W.P.Morrison, retired in 1958 and  Mr M.H.Stephenson was appointed.  In this time the swimming pool was one of the first in the county, opened in July 1961.  French was introduced into the curriculum.  In 1968 Mr Shippey who was the deputy at Southfields became Head teacher at Oakdale Primary and 100 children were transferred as Southfields had far too many children and was bursting at the seams.

In 1969 Anglia Television brought out the first sex education programme for primary schools, Southfields was impressed with the way this controversial subject had been treated and was used within the school.  1970 and the ‘Year of Liberation' when the county introduced comprehensive education for the children and Southfields was no longer restricted by the requirements of the selection examinations.

Over the years the school has been fortunate in employing an excellent team of dedicated teachers, staff and people who work within the school environment, Supportive parents and marvellous children.  Mr Sutherland saw the school through the 90's when he undertook building work and modernised the school, he also built one of the first computer suites in the county. 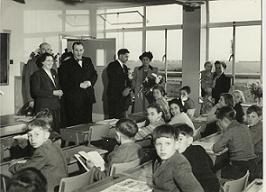 Mr Stephenson in his 21 year Head Teachers report written  on November 1974 stated this is ahappy school, time has not changed this, it is today and will remain a building full of energy and enthusiasm to enquire.  He also stated in his vision that he would like the school to, in the future have parents who came here as children.  We have achieved this goal and hope in the future to have Grandparents, parents and children who have grown up within Southfields School.

We have a number of letters, reports and photographs to share with you all. Reading about the history of the school has inspired me to achieve as much as the Head Teachers before me.